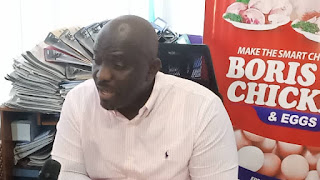 Chairman for the Ashanti regional poultry farmers’ association and CEO of Boris B farms, Dr Boris Baidu has revealed that prices of chicken and eggs which have gone up is neither the fault of poultry farmers nor the government. Despite siding with the fact that there has been an unprecedented increase in chicken prices, Boris B made it clear that the hike had emanated from the world market and that no one should be blamed for the increase.

He revealed that increase in poultry feeds such as shells, wheat, soya, maize etc on the world market coupled with a hike in petroleum prices have been the cause. Citing an example, he hinted that Chinese alone have been hijacking the prices of maize on the world market due to the rate at which the Chinese government is purchasing maize in bulk at a very high price.

The Chairman maintained that egg prices at the farm ranging from large, medium and small sizes are sold at ¢26, ¢24 and ¢22 respectively. He also disclosed that fowls are sold at ¢35 and ¢45 at the farm. 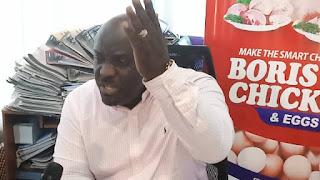 Mr. Boris Baidu’s explanation came after most customers within the Ashanti region had complained about high increase in prices of eggs and chicken. The complain had also been confirmed by some poultry farmers especially those within the Afigya Kwabre North and South who eventually expressed much worried over the development. Some of these poultry farmers earlier blamed the government and expressed worried over a deliberate neglect from the government and banks’ refusal to access them loans as major issues which was causing their work. According to the disappointed poultry farmers, death ears given them by the government even after several cries, was compelling them to do some things they were not conversant with. Thus they had no option than to increase egg and chicken prices. 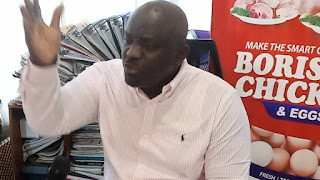 But reacting to the situation, the Ashanti regional Chairman indicated that even though the situation had been so worrying but neither the poultry farmers (leadership) nor ministry of Agric was to blame. This is because the problem had come from the world market.

He however suggested and pleaded with the Ghana’s parliament to quickly grant a huge government subsidy to help poultry farmers. He also blamed the various banks for being stingy to poultry farmers where he advised them to change their attitudes. He said leadership of poultry farmers had earlier met with the sector minister to discuss the way forward where subsidy grant and easy access to loans from banks were hugely suggested, even though there were other suggestions.

Simon opoku Afriyie is a media pratctioner, work with otec fm, Educationist and the chief Executive Officer of of this Noble website Simon opoku Afriyie hails from Manso mem in the Amansie south district of the Ashanti Region. For any information contact me on 0240458530/0201417427 Or you can visit my Gmail address [email protected]
Previous I Forsee Rerun In The December 7, 2020 Presidential Elections – Man Of God Predicts
Next Ghanaians Must Change Mentality Towards Death, Adopt Regular Exercise To Live Long-GNASSM Chairman: