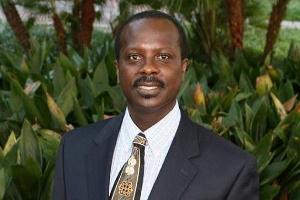 The United States-based legal luminary and Professor of Accounting, Prof. Stephen Kwaku Asare has advised sympathizers of the opposition National Democratic Congress (NDC) to desist from referring to former President John Dramani Mahama as President-Elect of the republic.

According to the professor who is popularly known as Prof. Kwaku Azar, a candidate can only be referred to as “president-elect” if he or she is a winner of certified election results and duly declared by the Electoral Commission of the country.The persistent reference to Mahama as the president-elect, according to Prof. Asare is causing harm to the image of the country which is noted globally for being a beacon of democracy on the African continent.“…it does harm to the public when NDC party members refer to his excellency as President-elect.” Prof. Asare wrote in a social media post sighted by GhanaVanguard.com.“Only the person certified as winner of the elections is President-elect and in this case it is President Nana Addo Danquah Akufo-Addo.” he added.Prof. Asare further advised former president Mahama to not take into account “ill” calls on him to declare himself president and form parallel government.Earlier today, outgoing Member of Parliament for Tamale Central constituency, Alhaji Inusah Fuseini, whiles speaking on Pan African TV’s Alhaji and Alhaji program said Mahama should declare himself president of the republic and go-ahead to form a government which will be a parallel one to the current New Patriotic Party (NPP) government.

According to Hon. Fuseini, everything shows that John Mahama clearly won the just-ended presidential election.“I have said and I have advocated that he declares himself President and forms a parallel government. And if he was minded to take my views, he should declare himself President and set up a parallel government. The impunity of this government which is legendary must stop and that’s how we stop it,” Fuseini stated on the program which was hosted by Sena Nombo.However, Prof. Asare stands in opposition to what the experienced parliamentarian said as he sees it to be unconstitutional.He further shot down Hon. Fuseini ‘s advise to John Mahama, describing it as “ill-advice” which John Mahama should not take into consideration.“There is no room for forming a parallel government in this country. We operate under a Constitution and it provides a clear process for disputing election results,” the professor stated.

He added that; “Ex-President John Dramani Mahama should ignore the ill advice of honourable Inusah Fuseini and continue to follow the law.”

Simon opoku Afriyie is a media pratctioner, work with otec fm, Educationist and the chief Executive Officer of of this Noble website Simon opoku Afriyie hails from Manso mem in the Amansie south district of the Ashanti Region. For any information contact me on 0240458530/0201417427 Or you can visit my Gmail address [email protected]
Previous Declare yourself president and form a parallel gov’t – Inusah Fuseini advises Mahama
Next Real Madrid 2-0 Atlético Madrid result, summary and goals: LaLiga 2020-21