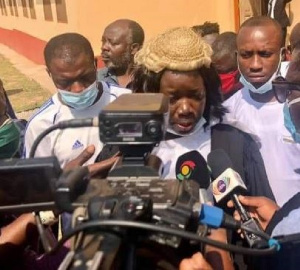 Lawyer Elizabeth Ofosu Adjare who represented the NDC addressing the media after the ruling.

The Wenchi High Court has thrown out a case brought before it by the New Patriotic Party against the Electoral Commission and the National Democratic Congress on the Sene West Parliamentary Elections.

The court ruled that the said case lacks merit, reason it was dismissed.

The NPP has also been fined an amount of GH¢20,000 for wasting the time of the court.The Sene West Constituency’s Tato Battor Polling Station B ballot box is yet to be counted after one Christian Nukpeta snatched the ballot box when the election results were being counted.Although Christian Nukpeta was arrested immediately, the parties involved noticed that the seal of the ballot box belonging to the NPP had been removed, leaving that of the Electoral Commission and NDC.As a result, Lawyers for the NPP’s Sene West parliamentary candidate, Joseph Markay Kuma, immediately sought an injunction from the court to stop the EC from counting the ballot papers in the box.

The ballot box was then locked up at the Techiman Police Headquarters.However, counsel for Joseph Markay Kuma withdrew their motion of injunction on the declaration of the results as filed in their petition.The court on Thursday quashed the case and by this, the EC can now go ahead to either count the snatched ballot box or conduct fresh elections in that polling station only.

Simon opoku Afriyie is a media pratctioner, work with otec fm, Educationist and the chief Executive Officer of of this Noble website Simon opoku Afriyie hails from Manso mem in the Amansie south district of the Ashanti Region. For any information contact me on 0240458530/0201417427 Or you can visit my Gmail address [email protected]
Previous Stay calm, we’re one – Jeff Konadu advises Akwatia political rivals
Next Election 2020: ABANTU, WMC applaud Jean Mensa for successful election