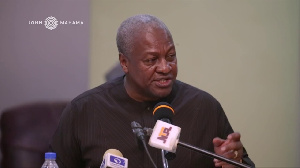 Member of the New Patriotic Party (NPP) National Communication Team, Saka Salia has advised former President Mahama against making demands of the Electoral Commission from the comfort of his home.

He motioned to the legal brains of opposition to remind the ex-President that the EC is an independent body whose work can only be legally reviewed by a body appointed by the Supreme Court.

The opposition NDC has rejected the outcome of the December 7 polls citing various instances of irregularities in the electoral process, pointing to the fact that the election was rigged.In a recent interview with Voice Of America (VOA), the flag bearer of the NDC stated he would only accept the results of the election and acknowledge President Akufo-Addo as President-elect if allowed an independent audit of the EC.Responding to this demand in an interview with Sefah-Danquah on Happy 98.9FM’s Epa Hoa Daben political talk show, Saka Salia noted that Ghana is a democratic state with laws, making it wrong for the former President to make such demands.“Mahama cannot be in his room and decide for the court what they should do. He has to get a ruling from the court before the EC’s work on December 7 can be audited”.

Furthering his point, the politician reminded Ghanaians the independence of the Commission saying; “The EC is an independent commission which is not subject to interference or external controls. So why would Mahama call for an independent audit on his own account”, he asked.

Citing the NPP’s election petition in 2012, Saka Salia indicated that KPMG was only able to audit the EC after the Supreme Court had given them that mandate. “If the NDC has a case, they should do so because that is how democracy works”, he advised.On his accord, he is surprised at the posture of the NDC over the 2020 election results when the EU, AU and Heads of other African states had praised the EC for the good work done and acknowledged President Akufo-Addo as the legitimate President-elect.He believes the NDC is just acting the way it is now to please their supporters but all Ghanaians should know, “the election was free and fair”.But for the avoidance of doubt, the NPP communicator encouraged the NDC to file an election petition rather than make false claims.

Simon opoku Afriyie is a media pratctioner, work with otec fm, Educationist and the chief Executive Officer of of this Noble website Simon opoku Afriyie hails from Manso mem in the Amansie south district of the Ashanti Region. For any information contact me on 0240458530/0201417427 Or you can visit my Gmail address [email protected]
Previous You cannot ask people to accept defeat when they’ve not received justice – PPP
Next The NDC’s chances of getting justice in court petition slim – Felix Kwakye