Rawlings was an emblem of freedom, hope and inspiration – Commonwealth Secretary General 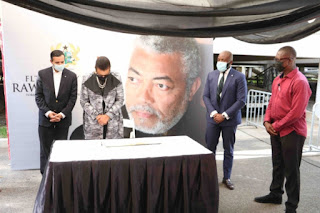 The Secretary-General of the Commonwealth, Baroness Patricia Scotland has described late former President Jerry John Rawlings, as “an emblem of freedom, hope and inspiration who represented the best of Africa”.

Baroness Scotland said the former President was not just loved by the people of Ghana but he was also an icon of Africa who represented freedom, liberty, good governance and the best of man.

In a touching tribute during a courtesy call on Nana Konadu Agyeman-Rawlings and the family on Monday, the Commonwealth Secretary-General said she had come to pay homage to what President Rawlings strove to achieve during his lifetime. 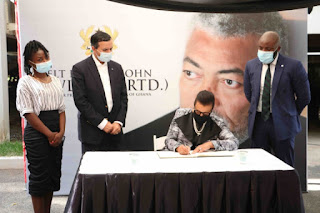 “The Commonwealth as you know is made up of 54 countries, 2.5 billion people, 60 per cent of whom are under the age of 30 and throughout the late President’s tenure and throughout his whole career, he cared greatly for young people – their future, their hopes, their aspirations and his humility and kindness is something that marked him apart from many of those from his era,” Baroness Scotland said.

The Commonwealth boss who was in Ghana with a team to monitor Ghana’s elections said she is in Ghana at a time when the former President’s memory is needed more than any time.

Baroness Scotland said: “The tensions are here between both parties that have competed in this election, but I hope that all will be uplifted by his (President Rawlings’) memory and that all Ghanaians will stay true to the torch that he has given us. 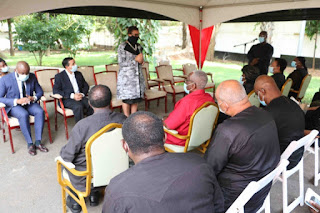 “So I am humbled that I am able to come on behalf of that 2.5 billion people to say that our heart is with you, our loss cannot mirror your loss; that we can partake in it because a light has gone from this world but it will never be extinguished. Because he lights our history and just as he lighted the way for our past, he will be the beacon for the future.”

Professor Luis Franceschi, Senior Director of the Governance and Peace Directorate of the Commonwealth Secretariat and leader of the Observer Mission to Ghana, said President Rawlings’ loss was a win for heaven. He described President Rawlings’ life as one of the best chapters of the democratic history of Ghana. 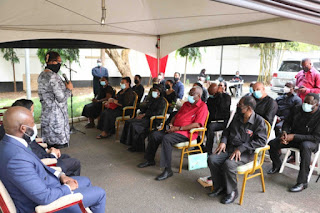 Professor Franceschi said: “We came here to observe the elections; there are many things that could be improved, that will be improved but certainly the legacy of that peaceful voting day is the legacy of a man who had the courage to guide the country to this democratic path which shines not only in Africa but across the Commonwealth. And coming from Kenya, I know when we were creating our constitution we very carefully looked at Ghana and the experience of Ghana. It taught us many things. We thank Ghana for giving that great statesman to Africa and the Commonwealth.

The Head of the funeral planning committee, Ambassador James Victor Gbeho, thanked Baroness Scotland for finding time off her busy schedule to mourn with the family. He narrated circumstances surrounding the demise of the former President and said the family was impressed with the visit of the Commonwealth Secretary-General.

Ambassador Gbeho described President Rawlings as a unique personality who revolutionized leadership and governance in Ghana. He said the kind of democracy in Ghana, even though somewhat shaky sometimes was a contribution from “this great man”.

Simon opoku Afriyie is a media pratctioner, work with otec fm, Educationist and the chief Executive Officer of of this Noble website Simon opoku Afriyie hails from Manso mem in the Amansie south district of the Ashanti Region. For any information contact me on 0240458530/0201417427 Or you can visit my Gmail address [email protected]
Previous Rawlings’ funeral postponed indefinitely
Next Election 2020: NPP bribed voters with ‘kako’, ‘momoni’ and maggi cubes for votes but lost — Sagnarigu MP ABA Fuseini