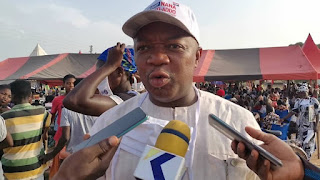 The District Chief Executive for Sekyere Afram Plains district who double as parliamentary candidate for the new patriotic party (npp), Hon Joseph Gyamfi Owusu popular known in politics as Odenkyem has fully pledged chiefs and people of Drobonso that, his office is ever ready to see to it that they have received an ultra modern palace to help promote tradition and culture in the district. 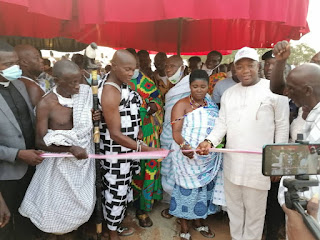 The ceremony attracted a lot of traditional authorities in the Ashanti region and the representative of Paramount chief of Kumawu, Barimah Sarfo Tweneboah Kodua II, and many others.

In his part, the chief of Drobonso, Nana Dwamena Dankwah Dwubinsiaw II emphasized on the need to construct a befitting palace for a community as means to help promote tradition and culture.

He however appealed to his fellow traditional authorities to always involves the people on their decision to enable the them show much commitment to community self-help projects.

Simon opoku Afriyie is a media pratctioner, work with otec fm, Educationist and the chief Executive Officer of of this Noble website Simon opoku Afriyie hails from Manso mem in the Amansie south district of the Ashanti Region. For any information contact me on 0240458530/0201417427 Or you can visit my Gmail address [email protected]
Previous 2020 WASSCE: We’ve proved critics wrong – Education Ministry
Next NBU PROJECT (YEAR 2020); 200 TRAINEES GRADUATE AFTER SUCCESSFUL TRAINING