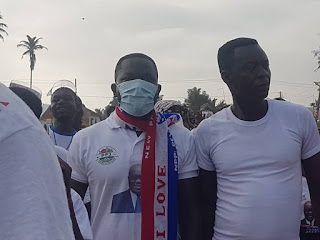 The Atwima Mponua new patriotic party (NPP) led by the sector deputy manager of Masloc  in charge of  credit in the  Atwema Mponua constituency   Mr. Paul Sarbeng has  organised a health walk in the Mpasatia.

The walk recorded an unprecedented massive turn-out in the political history of Atwima Mponua Constituency.

The walk which is to keep members fit and canvases vote in the 2020 elections. 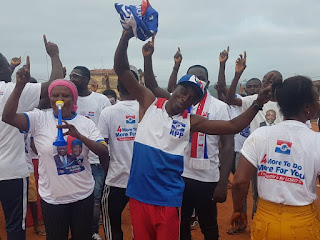 The walk which bring together  executives, supporters and sympathizers to make unity among them.

Angel Tv/fm  News reporter Bismarck Mensah had interview with Mr. Pual Sarbeng, said the secret behind the health walk is to bring back all party members in the constituency together and also to win massive vote for the government in power and the sports minister Hon. Isaac Asiamah this year election.

They given the four hundred party T’shit to the members in the constituency. 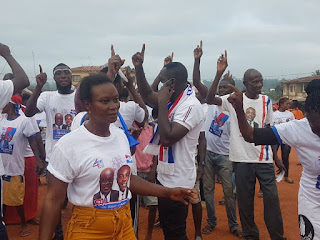 They going to give the NPP government  80%, because the government has done alot of projects like, roads, school buildings, police station in their constituency.

Simon opoku Afriyie is a media pratctioner, work with otec fm, Educationist and the chief Executive Officer of of this Noble website Simon opoku Afriyie hails from Manso mem in the Amansie south district of the Ashanti Region. For any information contact me on 0240458530/0201417427 Or you can visit my Gmail address [email protected]
Previous WONTUMI CAUTIONED PARTY EXECUTIVES FOR SUPPORTING INDEPENDENT CANDIDATE-MANSO ADUBIA
Next * WE ARE TIRED OF SHARING WATER WITH ANIMALS -RESIDENTS OF AGOU-FIE CHALLA CRY OVER*