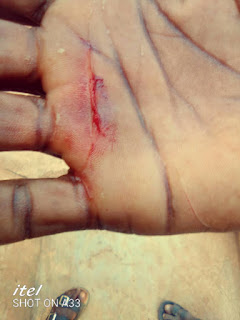 I am representing my good people at Atronie to register our displeasure concerning the barbaric and heinous attack on us by the thugs of Hon Kwasi Ameyaw-cheremeh today at Atronie.

We received a message from one Baba Amando who claims to be the special aide to Hon Kwasi Ameyaw-Cheremeh,the Member of Parliament(MP) for the Sunyani East that the MP will be visiting the Atronie Community for a thank you tour.

The people of Atronie graciously gathered for the coming of Hon kwasi ameyaw-cheremeh not knowing his thugs had diabolical agenda to beat and wound some innocent Party faithfuls.

We the people of Atronie never knew the MP had registered some people at Atronie towards the 2021 polling station delegates Elections. This move by the MP is aimed at fighting against Constituency Executives who are not on his side and subsequently 2024 parliamentary Elections.

There were also some group of people who had met in their homes at Atronie which was 100 metres away from the gathering by Hon  kwasi Ameyaw-cheremeh. The group was also having their own discussions and the thugs: Baba Amando, Bartholomew Incoom and the other cohorts intruded their homes because they perceived those people to be Anti- KwasiAmeyaw-Cheremeh. They  attacked them and beat them resulting in the butchering and cutting the hand of one Abu Ibrahim Chipsa *(0558465506)* who is a Party member at Atronie. All the documents belonging to the people were ceased and have been torn by the thugs.

I, the Coordinator wish to crave the indulgence of the Constituency Council of Elders, the other Constituency Executives, the Regional Party and the National Party to come to our aide at Atronie to stop the illegal registration of persons who are closer to Hon Kwasi Ameyaw-cheremeh (MP) immediately.

Meanwhile we have reported the crime commissioned by MP’s thugs to the Police station at Atronie for investigations. The police has issued a medical report form to Abu the injured person to go for medical at the Atronie Clinic.

Simon opoku Afriyie is a media pratctioner, work with otec fm, Educationist and the chief Executive Officer of of this Noble website Simon opoku Afriyie hails from Manso mem in the Amansie south district of the Ashanti Region. For any information contact me on 0240458530/0201417427 Or you can visit my Gmail address [email protected]
Previous Ga Chief Gets International Appointment
Next Nsuta –Kwamang- Beposo NPP MP-Elect denies dual citizenship tag