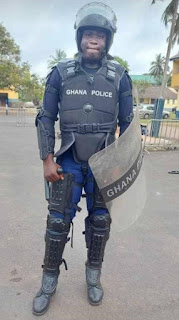 A member of the Rapid Deployment Force (RDF) unit of the Ghana Police Service in Takoradi has met his untimely death after he was shot by his own AK-47 rifle.

The Police Officer, Constable Senanu Davordzie allegedly fell on the rifle which subsequently discharged two bullets into his abdomen.

Confirming the news, the Regional Police Public Relations Officer, Olivia Ewuraabena Adiku said the personnel had returned from night duty and was returning the rifle to the armoury when the incident occurred. 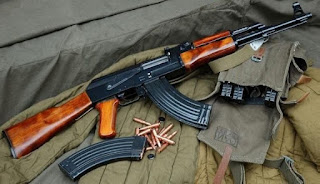 “At the entrance of the RDF charge office, Senanu fell off the motorbike and the rifle he was carrying went off accidentally, discharging two ammunition, which hit him in the abdomen.”He was rushed to the Takoradi hospital by colleagues where he was pronounced dead on arrival.

Senanu was described by his colleagues as a fine police officer, hard working and respectful.

His body has since been deposited at the same hospital morgue for preservation and autopsy.

Simon opoku Afriyie is a media pratctioner, work with otec fm, Educationist and the chief Executive Officer of of this Noble website Simon opoku Afriyie hails from Manso mem in the Amansie south district of the Ashanti Region. For any information contact me on 0240458530/0201417427 Or you can visit my Gmail address [email protected]
Previous Real Madrid 2-0 Atlético Madrid result, summary and goals: LaLiga 2020-21
Next Prophet Gabriel Owusu Blessing ordained as Apostle