The law will deal with you and your paymasters – Koku Anyidoho 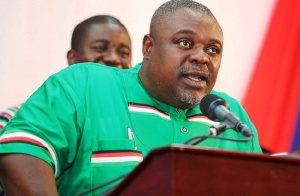 The Chief Executive Officer (CEO) of Atta Mills Institute, Koku Anyidoho says his life has been threatened by one Nuhu McCarthy after reporting that the 2020 general election was free, fair and transparent as part of the local observers of the just-ended elections.

According to the Friday edition of The Informer Newspaper, the founder and Chief Executive Officer [CEO] of the Atta Mills Institute, Samuel Koku Anyidoho on Thursday, December 17, 2020, made an official complaint to the Cyber Crime Unit of the Police Criminal Investigation Department [CID], as regards some group of hoodlums issuing threats against his person on social media platforms.The hoodlums, who are not hiding their support for defeated NDC Presidential Candidate, John Dramani Mahama, have continued to hurl insults and issued all kinds of threats at the person of Koku Anyidoho and Atta Mills Institute ever since the institute applied for and was duly given accreditation by the Electoral Commission of Ghana, to be part of the 22 Citizen Observer Teams that observed the just-ended 2020 Presidential and Parliamentary elections.In one of the death threats, a certain Nuhu McCarthy, who is believed to be an employee of HIBA PATROLS and is supposed to be domiciled in Tema, made it quite clear that he has well-calculated plans to either harm or kill the Founder and CEO of the Atta Mills Institute.“Koku, I am warning you to be very careful with all [you] have been writing if not…watch your back I am closing in on you, soon you will see, thanks”.In an interview with Okay FM’s Ade Akye Abia Morning Show, Mr Koku Anyidoho warned the person who threatened him that the able laws of the country will deal with him for deciding to go after members of the Atta Mills Institute.

“What is the crime of the Atta Mills Institute that we went and observed an election and stated that the voting process was free and fair? It is not only me who is saying it but CODEO and IDEG also said the same thing. ECOWAS Observers also said the same thing in an interview with VOA.”“What is it that Koku Anyidoho has done wrong? Then a small boy will go and sit on the internet, run me down and want to run my family down and now he is threatening me…well, the laws of Ghana will close in on you, Nuhu McCarthy and your paymasters…then you will know that the laws of Ghana work”, he warned.“What have I done to them? Whose money have I stolen? What are they saying I have done to them that I cannot live like a Ghanaian? They have the right to live; they have the right to self-preservation, right to self-existence but Koku Anyidoho does not have the right to self-preservation. He doesn’t have the right to live, work and earn a decent living and so if he gets on the air and doesn’t speak politics every day to run people down, then he is a traitor; let’s go after him, let’s kill him”, he lamented.

Simon opoku Afriyie is a media pratctioner, work with otec fm, Educationist and the chief Executive Officer of of this Noble website Simon opoku Afriyie hails from Manso mem in the Amansie south district of the Ashanti Region. For any information contact me on 0240458530/0201417427 Or you can visit my Gmail address [email protected]
Previous NDC’s demonstration is unlawful – ACP Kwasi Ofori
Next Customers of Sekyere Rural Bank Enthused over the performance of the Bank Despite 2019 Financial Crisis