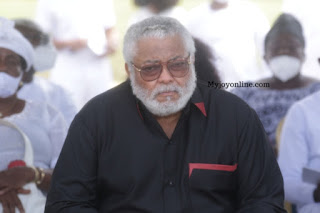 The final burial rites of the late former President Jerry John Rawlings have been postponed indefinitely.

The funeral arrangement had initially been scheduled for December 20, 2020.

But concerns raised by the Awadada of the Anlo State, Agbotui and Allied family had caused President Akufo-Addo to allow them settle all outstanding issues regarding the customary rites and select a suitable date for the state to join in facilitating the departure of the late statesman.However, a communique by the Ministry of Foreign Affairs and Regional Integration to the international community and diplomatic missions revealed a change in the schedule.“…due to unforeseen circumstances, the funeral will not be held from 20th December, 2020 as planned,” the statement read.

It further indicated that “the new date for the funeral will be communicated in due course.”

Simon opoku Afriyie is a media pratctioner, work with otec fm, Educationist and the chief Executive Officer of of this Noble website Simon opoku Afriyie hails from Manso mem in the Amansie south district of the Ashanti Region. For any information contact me on 0240458530/0201417427 Or you can visit my Gmail address [email protected]
Previous 3 convicted 48 months for stealing
Next Rawlings was an emblem of freedom, hope and inspiration – Commonwealth Secretary General