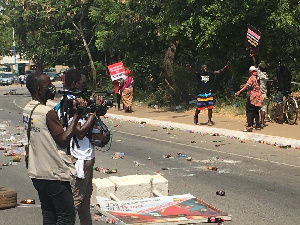 Again, he said it was unlawful for the NDC supporters to take over the streets, destroy property and deprive citizens of peace of mind.“You can’t just take over the streets, burning tyres, destroy billboards and cause mayhem. We are calling on the leadership of NDC to call their people to order and we are sending a strong warning to the demonstrators that we will not allow them do anything they want,” he said.The ACP assured that the security agencies (Police and Military) were on top of their game and would not sit idle for the demonstrators to take the law into their own hands.

In the early hours of Thursday, a crowd of NDC supporters marched to the Electoral Commission Headquarters in Accra to protest against the 2020 General Election results.

Protestors however clashed with members of the security agencies who were determined to keep them at bay, leading to the burning of tyres and stone-throwing whilst others tried to force their way through the barricade.Most of them kept chanting, “No Mahama, No Peace”, “No Mahama, No President” while others had placards with inscriptions such as “Jean Mensah, Ladies Don’t Steal.”The Police and Military responded by spraying water, tear gas and firing rubber bullets to disperse the crowd. Some protestors were arrested.

Simon opoku Afriyie is a media pratctioner, work with otec fm, Educationist and the chief Executive Officer of of this Noble website Simon opoku Afriyie hails from Manso mem in the Amansie south district of the Ashanti Region. For any information contact me on 0240458530/0201417427 Or you can visit my Gmail address [email protected]
Previous Election 2020: Run-off would’ve shown our relevance – JOY
Next The law will deal with you and your paymasters – Koku Anyidoho