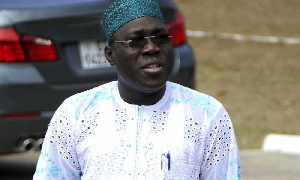 Member of Parliament(MP) for Tamale Central Constituency Alhaji Inusah Fuseini has advised former President of Ghana John Dramani Mahama to declare himself president-elect and form a parallel government.The former President and the National Democratic Congress (NDC) have said that they will not accept the results of the 2020 general election.

According to them, the results declared by the Commission are fictionalized and that they cannot accept it.The NDC’s claims seem to have had had grounding after the Electoral Commission admitted to having committed some errors in the total valid votes counted on the day.But speaking on Pan African Television, Inusah Fuseini who is a former Roads and Highways Minister thinks that John Dramani Mahama has won the election and needs to declare himself the President.According to him, the former President should form a parallel government because he has won the election and it is a known fact.“I have said and I have advocated that he declares himself President and forms a parallel government. And if he was minded to take my views, he should declare himself President and set up a parallel government. The impunity of this government which is legendary must stop and that’s how we stop it,’ he said on Accra-based Pan African TV monitored by MyNewsGh.com

Simon opoku Afriyie is a media pratctioner, work with otec fm, Educationist and the chief Executive Officer of of this Noble website Simon opoku Afriyie hails from Manso mem in the Amansie south district of the Ashanti Region. For any information contact me on 0240458530/0201417427 Or you can visit my Gmail address [email protected]
Previous Police invites Jomoro NDC, NPP executives after clash leaves 2 injured
Next Prof. Stephen Asare cautions NDC members to stop referring to Mahama as President-Elect