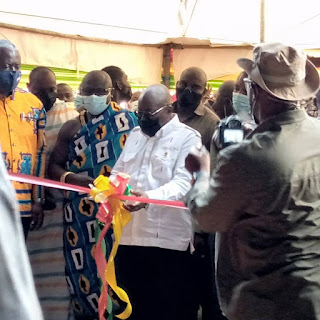 At a ceremony at the premises of the company at Mpasaatia, in the Ashanti Region, President Akufo-Addo noted that the establishment of the factory is a concrete manifestation that the new paradigm of economic development, which his administration is vigorously pursuing, of insisting on value-addition industrial activities within a conducive and business-friendly environment, can make headway. 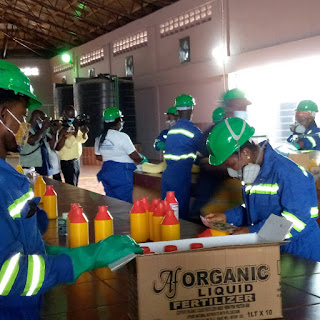 “This afternoon’s ceremony is in fulfillment of the promise by Government, in partnership with the private sector, to set up at least one medium to large scale enterprise in every district of Ghana,” he said.

The 1-District-1-Factory initiative, the President explained, focuses on the promotion of commercially viable business ventures, through the establishment of an institutional framework that will attract private sector investments in rural economic activities.

“In response to this, New Okaff industries  Limited took the initiative, with the support of Government, to build this new factory at Mpasaatia in the Atwima Nwabiagya South District of the Ashanti Region,” he said.

He continued, “The factory will produce Agro chemicals, wedicides and insecticides spray.

With a capacity to produce the needed chemicals and wedicides per hour at full capacity, the President noted that the factory will employ over  300 people directly, and also generate some 3,000 indirect jobs through the supply chain.

President Akufo-Addo applauded the company for sourcing about 90% of its packaging materials domestically, as bottles and caps are all produced in Ghana.

“I am particularly pleased that a successful and innovative company like New Okaff is finding new opportunities under the 1D1F policy, and would like to assure them of Government’s unwavering support,” he added.

To companies operating under Government’s 1D1F programme and other companies operating at the local private sector operating at the district level, the Alan Kwadwo Kyeremateng who is the minister of Trade and Industry reminded them that the Ministry of Trade and Industry, in collaboration with relevant Ministries, Departments and Agencies, has established an institutional mechanism to provide strategic support and assistance to them.

“That is why we have established Business Resource Centers in sixty-seven (67) districts across the country, thirty (30) of which have already commenced operations. I commend the shareholders and management of New Okaff for their diligence and commitment towards boosting the capacity of our nation towards self-reliance,” he said. 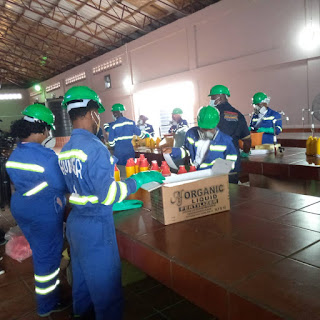 Simon opoku Afriyie is a media pratctioner, work with otec fm, Educationist and the chief Executive Officer of of this Noble website Simon opoku Afriyie hails from Manso mem in the Amansie south district of the Ashanti Region. For any information contact me on 0240458530/0201417427 Or you can visit my Gmail address [email protected]
Previous Dr. Kingsley Nyarko Donates 42 Sewing Machines to Graduands
Next UPP, PUP declares support for NPP in 2020 elections.