The Area Council of Manso Asuonwunu in the Amansie West district of Ashanti, has donated motorbikes to the Nkawie Divisional police Command in the Atwima Mponua district.

This gesture, according to the Council, is to enable effective policing and help curb crime in the constituency.

Handing over the motorbikes ,the Assemblyman for the Hiakose Electoral Area, Hon Isaac Manu  underscored the importance of the police service to citizens.

He said police play a significant role in ensuring that one goes about his or herr duties safely without looking over the shoulders of security.

Hon Isaac Manu  said, “we all need to support the police in various ways for effective policing duties.” 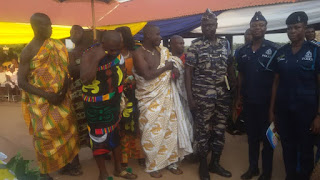 He seized the opportunity to appeal to the general public especially, benevolent and philanthropist  to come to their aid with such gestures.

Contact choicenewsonline.com on 0240458530 / 0548913442 Or you can visit my Gmail simonopokua@gmail.com
Previous Atwima Mponua Opinion leaders appeal to Akuffo- Addo to retain their DCE
Next DONASO COMMUNITY GETS 6 UNIT CLASSROOM BLOCK IN THEIR FIRST TIME EVER