The Ghana Police service in the Abuakwa of the Atwima Nwabiagya South Municipality of Ashanti region has Inaugurated a 25 member Neighborhood watchdog Committee to support the Police to beef up security at Atwima Makro electoral area.

This watchdog Committee is to help get rid of criminals who have used the areas as their home where all negative activities are carried out including stealing of valuables, robbery and killing among others.

The members were selected from areas like in Atwima Makro Zongo, ten plots, Nakisa formed to ensure the welfare of the residents.

The committee is expected to enhance security consciousness among traders and neighbours, encourage citizen’s participation in crime prevention and build strong informant base to arrest perpetrators.

Speaking at the inaugural ceremony held at the Abuakwa Makro park.

Speaking at the ceremony, the Divisional Police Commander told the members of watchdog Committee, the maintenance of security in society should not be seen as the sole responsibility of the police.

On his part, the Assemblyman for that area Hon. Agyenim Boateng expressed his profound gratitude to the Abuakwa Divisional Police Commander for listening to their appeal for assisting them to inaugurated watchdog Committee. 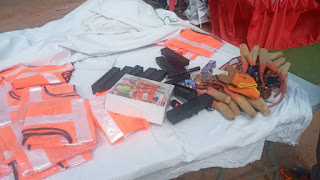 He added that, a lot of people come in and leave but some also stay to pursue their businesses.

Baffour Owusu Afriyie, Otumfour Abrafourhene has advised them to be respectful and respect all the security agencies and also be truthful to their work.

He therefore called on the committee members to collaborate with the police in combating crime in the Municipality.

He cautioned them not involved themselves in any rid activities as far as the watchdog is concern.

Simon opoku Afriyie is a media pratctioner, work with otec fm, Educationist and the chief Executive Officer of of this Noble website Simon opoku Afriyie hails from Manso mem in the Amansie south district of the Ashanti Region. For any information contact me on 0240458530/0201417427 Or you can visit my Gmail address [email protected]
Previous A/R : PENIEL PRAYER MINISTRY DONATES TO ORPHANAGE
Next Honorable Isaac Asiamah Xmas Gala ends successfully