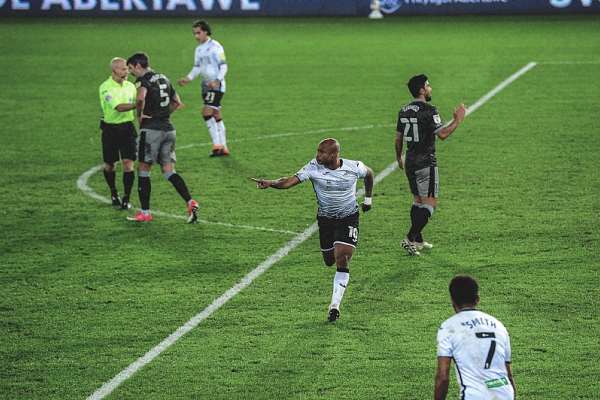 Ghana International Andre Ayew climbed off the bench to score a decisive goal on Wednesday night to earn a point for Swansea City on the back of a 1-1 draw against Sheffield Wednesday.

The exciting attacker watched his team from the stands as a result of an injury over the past weekend when the side earned a narrow win against Rotherham.

Today, Andre Ayew missed out on a starting role when Swansea City faced their Matchday 13 opponent of the 2020/2021 English Championship season.

Replacing Kyle Naughton at the break, the inspirational forward went on to score in the 60th minute after he was assisted by Connor Roberts.

The goal canceled a first-half strike from Adam Reach while ensuring Swansea City drew 1-1 against Sheffield Wednesday at the end of the 90 minutes at the Liberty Stadium.

For his match-changing performance, Andre Ayew merited a high rating of 7.3 from Modernghana Sports partners and top statistics providers SofaScore. 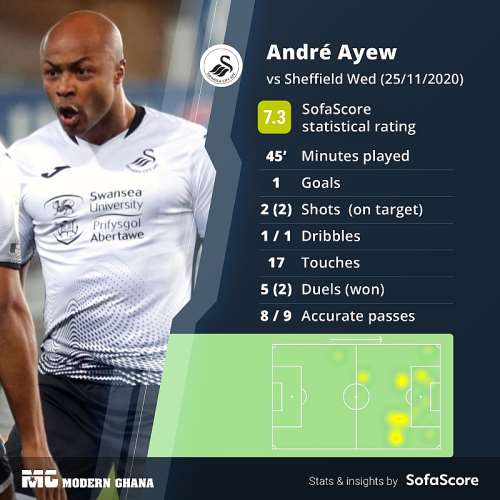 With today’s goal, Andre Ayew has now taken his tally to 6 and also has 1 assist to his name after making 12 appearances for Swansea City in this season’s English Championship.

Simon opoku Afriyie is a media pratctioner, work with otec fm, Educationist and the chief Executive Officer of of this Noble website Simon opoku Afriyie hails from Manso mem in the Amansie south district of the Ashanti Region. For any information contact me on 0240458530/0201417427 Or you can visit my Gmail address [email protected]
Previous Voters’ Details Could’ve Been Published In More Responsible Way – Lawyer
Next sexual advances – Rufftown Records signee