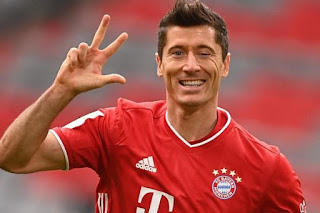 Robert Lewandowski has capped a history-making season for Bayern Munich by winning FIFA’s The Best award ahead of Lionel Messi and Cristiano Ronaldo.

The Polish striker was the star of the Bavarians’ treble-winning campaign, scoring 55 goals in all competitions as Bayern recovered from a poor start to make history.

He is the first player from outside La Liga to win the award, which is now in its fifth edition. Cristiano Ronaldo (twice), Lionel Messi and Luka Modric were the previous winners.

It caps a fine day for Bayern, whose captain Manuel Neuer won The Best Men’s Goalkeeper Award for the first time in his glittering career, having finished as runner-up in 2017.

The German said: “It is one of the best years of my career, we were so confident with our team and amazing what we did in 2020. We are very happy.”

Jurgen Klopp overcame the odds to pip Bayern Munich’s Hansi Flick to The Best Men’s Coach award after leading the Anfield side to their first title in 30 years.

“I am [shocked]. I was sitting here because I thought last year I won it. I am here with my players. Thank you very much, wow,” the former Borussia Dortmund boss, looking very shocked, said.

“I have so many people to thank and most of all my coaches. If I had known we’d won it my coaches would be here with me. What we did in the last year is all about these boys.

“We didn’t dream 30 years but we dream already for a few years. It was absolutely exceptional and we all had a special year in an unfortunately not so positive way but for Liverpool fans at least we could make some highlights in a tricky period. I had no idea how it would feel and it felt absolutely overwhelming.”

Finally, Son Heung-min’s superb individual effort for Tottenham against Burnley in the Premier League in December 2019 won the Puskas Award for the best goal.”After I scored, I didn’t realise it was that amazing – after the game, I watched it again, and was thinking ‘wow, this is something special’,” the South Korean said.

“During the game, you focus, afterwards I was so surprised that I was so far away, so many people around me. It was an amazing feeling.”

The event took place digitally, with an audience appearing behind co-hosts Ruud Gullit and Reshmin Chowdhury via video call.

There was a tribute from FIFA, led by Gianni Infantino, to the healthcare staff who fought the coronavirus pandemic on the front line and ones to Diego Maradona and Gerard Houllier after their recent deaths.

Marcus Rashford, following his campaign against child food poverty, was recognised with the FIFA Foundation Award.

Simon opoku Afriyie is a media pratctioner, work with otec fm, Educationist and the chief Executive Officer of of this Noble website Simon opoku Afriyie hails from Manso mem in the Amansie south district of the Ashanti Region. For any information contact me on 0240458530/0201417427 Or you can visit my Gmail address [email protected]
Previous Airport staff grabbed for allegedly stealing mobile phones from aircraft
Next 2020/21 Ghana Premier League: Great Olympics troll Asante Kotoko after impressive 1-0 win