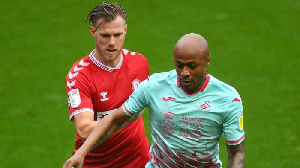 Anglo-Nigerian Ameobi was afforded his 14th appearance for Nottingham Forest across all competitions and gave a good account of himself, although his effort was not enough to help his side avoid their eighth defeat.The game started with both sides aiming to open the scoring in the early minutes but missed a number of chances.Moments before the half-time break, however, Connor Roberts broke the deadlock with a fine strike which proved vital.Despite efforts from Nottingham Forest to level proceedings in the second half, Swansea held on to their lead and secure all three points in the encounter.

Ayew made 54 touches on the ball, struck four shots, made two crosses, and had a 62 per cent successful pass rate in the game.Ameobi, meanwhile, completed four dribbles in his quest to open the Swansea defence, made one key pass, and had 48 touches on the ball.Ayew featured for the duration of the game while the Anglo-Nigerian made way for Will Swan in the 76th minute.With the result, Swansea moved to fourth on the Championship table with 26 points from 14 games while Nottingham Forest dropped to the 21st spot with 12 points from the same number of matches.Ayew and Ameobi will hope to help their respective clubs secure positive results in their next league game in December.

Simon opoku Afriyie is a media pratctioner, work with otec fm, Educationist and the chief Executive Officer of of this Noble website Simon opoku Afriyie hails from Manso mem in the Amansie south district of the Ashanti Region. For any information contact me on 0240458530/0201417427 Or you can visit my Gmail address [email protected]
Previous Farmer Urges Gov’t To Motivate Youth To Invest In Agric
Next CAF Champions League: Asante Kotoko hold FC Nouadhibou in preliminary round first leg