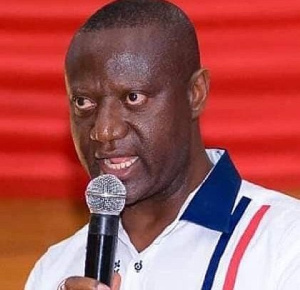 The Eastern Regional Secretary of the ruling New Patriotic Party Jeff Konadu Addo has advised some constituency executives and groups of people at Akwatia to stay calm following the various accusations towards the outcome of the election in the area.

Meanwhile, a group calling itself concerned Members of New Patriotic Party (NPP) in Akwatia is blaming the National Women’s Organizer, Kate Gyamfua, for the party’s loss of the Akwatia Parliamentary seat.

Addressing the media Tuesday, the group said Kate Gyamfua never liked and supported the outgoing Member of Parliament Mercy Adu Gyamfi alias Ama Sey, therefore, deployed all tactics to make her unsuccessful in her political career.Speaking on Nkawkaw-based Agoo FM on Wednesday 16th December 2020, Jeff Konadu revealed the Regional Executives are looking forward to having a crunch meeting to find an amicable solution to the matter.Some Constituency Executives have accused the outgoing Member of Parliament of Akwatia Mercy Adu Gyamfi, popularly known as Ama Sey of causing the Parliamentary Candidate Ernest Yaw Kumi’s defeat in the just-ended 2020 General Election.According to them, Ama Sey and his team engage in a ‘skirt and blouse’ campaign against Ernest Yaw Kumi.In response, a group by name ‘Friends of Ama Sey’ asked the General Public to disregard such accusation attributing the results to the Executive’s failure to involve their leader Ama Sey and her team during the campaign period but was quick to add that, the outgoing Member of Parliament independently and passionately campaigned for the president and the parliamentary candidate.Moreover, The Constituency Organiser Kwadwo Owusu Aduomi, has also alleged that the demeanor of the Senior Minister, Yaw Osafo-Maafo in the constituency towards the party’s parliamentary candidate, Ernest Yaw Kumi, following the defeat of the incumbent Member of Parliament, Mercy Adu Gyamfi, affected the party’s fortunes in the elections.He, therefore, accused the Senior Minister of being responsible for the party’s failure to retain the parliamentary seat in the just-ended election.

This, the group alleges, manifested during the Parliamentary primaries when votes were manipulated to favour Ernest Yaw Kumi, a darling boy of Kate Gyamfua to unseat Ama Sey as a parliamentary candidate despite his unpopularity in the constituency.Jeff Konadu responding to these accusations said there is the need to learn something from what has happened instead of blaming one another.“We are all one family, lets learn something from what has happened instead of the unnecessary blame games. I will advise each and everyone to stay calm. The National Council is also taking steps to address the entire problem at Akwatia.’’ He told hostess Obaahemaa Yaa Mirekua.
Source:kasapa fm

Contact choicenewsonline.com on 0240458530 / 0548913442 Or you can visit my Gmail simonopokua@gmail.com
Previous NDC protesters clash with police at EC Headquarters
Next Sene West elections: Court throws out NPP suit against EC, NDC