NPP calls for immediate arrest of NDC Chairman over ‘treason’ 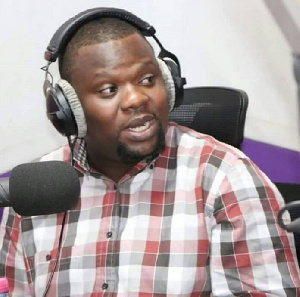 Kwame Zu is the Ashanti Regional Secretary for the NDC,

The New patriotic Party (NPP) in the Ashanti Region has called on the Ghana Police Service to, as a matter of urgency, arrest the Regional Chairman of the opposition National Democratic Congress (NDC) for making “treasonable” comments.

Ashanti Regional Secretary for the NDC Kwame Zu had earlier signed a letter announcing the arrival of the former president in the Ashanti Region with the caption “President-elect” contrary to the outcome of the just-ended election.The NDC Regional Chairman confirmed the origin of the letter and also reiterated on live radio in an interview with Kofi Asante Ennin on GhanAkoma: “Yes, I signed the letter”.However, First Vice Chairman of NPP in Ashanti Region Kwabena Nsenkyire says the leadership of NDC in the region have been inciting their followers since the declaration of the December 7 election results with their worse being the description of the former president as “the president-elect”.

Mr Nsenkyire, who joined the discussion, urged the security agencies to do the needful by arresting the NDC leader for such treasonable comments.

“There’s only one president-elect of the republic of Ghana, any other pronouncement or declaration is tantamount to treason so I don’t know why after making such comments, he is walking freely. The police and other security agencies must arrest such people.”Meanwhile, the leadership of the NDC in the region and across the country believe their presidential candidate in the just-ended elections won the elections and it is just a matter of time for the table to turn.For them, intense protests will ensure the EC comes clear on what they describe as real declaration of the 2020 elections.

Simon opoku Afriyie is a media pratctioner, work with otec fm, Educationist and the chief Executive Officer of of this Noble website Simon opoku Afriyie hails from Manso mem in the Amansie south district of the Ashanti Region. For any information contact me on 0240458530/0201417427 Or you can visit my Gmail address [email protected]
Previous AMANSIE SOUTH: SMALL SCALE MINERS APPEAL TO GOVERNMENT
Next Atwima Mponua DCE praise constituents for peaceful Elections.