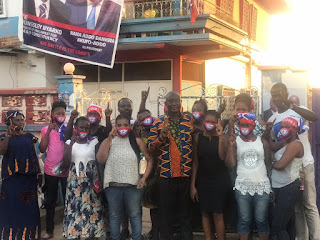 Over one hundred (100) people who are staunch members of the main opposition National Democratic Congress (NDC) have defected to the governing New Patriotic Party (NPP) in Kwadaso Constituency, Ashanti region. The defectors comprised of over forty (40) from the Nzima-Kokode electoral area, over thirty (50) from Nyankyerenease and over ten (10) from Kwadaso North.

In a meeting with the Kwadaso NPP Constituency Executives, the defected NDC members said they are now convinced to join the NPP because of the massive development being undertaken by President Nana Addo Dankwa Akufo-Addo and his government. They also added that the Free SHS has alleviated the financial difficulties that they used to go through in taking care of their wards in the Senior High Schools (SHS). They also made mention of the significant impact of NABCO and how it has helped in curbing graduate unemployment experienced under the John Mahama administration.

“NABCO is a marvelous initiative. When it started, we thought it was a lie, until it started paying the over 100,000 people Gh¢ 700.00 every month”, one of the women stated.

“NDC policies are for few people but the NPP policies such as the Free SHS are for everybody. Nana cares for everyone that is why he has started paying monies of customers of collapsed banks, and also, if there is a government that has really improved the welfare of the security services, then, it is no other than this NPP government”, another asserted.

“In light of these, we have voluntarily pledged our unflinching support to vigorously campaign and make sure the ruling NPP retains power for President Akufo Addo to continue with his good works for the people of Ghana, and also vote massively for Dr Kingsley Nyarko as our next Member of Parliament (MP) for Kwadaso”, they added.

Welcoming the defectors into the fold of the NPP, the Kwadaso Constituency NPP chairman, Mr. Yaw Bonnah Boadi stated that Ghanaians should reject the NDC because the John Mahama led NDC has nothing good to offer Ghanaians. ” What is former President John Mahama coming to do again? He is only coming back to steal more. He is coming to sell the Nyinahin bauxite back to his brother again. John Mahama has nothing to offer us. He is coming to destroy what the NPP has built again”, Chairman Bonnah postulated. He further advised the defectors to vote massively for President Nana Akufo-Addo and his NPP led administration to maintain Free SHS.

The Kwadaso Constituency Youth Organizer, Mr. Silas Boateng expressed confidence that the NDC would soon be hit by more defections as a results of the massive campaigning and propagation of the good works of the NPP across the constituency, and that, the decision they have made is a good one, a decision they would never regret.

Simon opoku Afriyie is a media pratctioner, work with otec fm, Educationist and the chief Executive Officer of of this Noble website Simon opoku Afriyie hails from Manso mem in the Amansie south district of the Ashanti Region. For any information contact me on 0240458530/0201417427 Or you can visit my Gmail address [email protected]
Previous Akufo-Addo mistakenly endorses NDC’s Nii Lante Vanderpuye at final rally
Next Hon Isaac kwame Asiamah tour 537 communities in the Atwima Mponua district