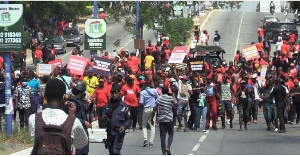 Some NDC protestors at the Electoral Commission Headquarters

A human rights lawyer, Francis Xavier Sosu, is demanding medical attention or bail for protestors who were arrested during a protest at the Electoral Commission earlier on Thursday.

The protestors numbering about 25 of which some are believed to be injured, were arrested for picketing at the headquarters of the Electoral Commission.Following this development, Francis Xavier Sosu has raised concerns about the failure of the police to give the injured individuals medical attention or grant them bail so they could personally seek medical attention.Speaking to Ghanaweb in a telephone conversation, he said denying them bail or medical attention is a violation of their right and he is worried their condition may deteriorate overnight.“About some 25 of them are here and we are demanding for their released either on bail. At least they’ve present them before the court and they have been cautioned and charged. We are aware they want to put them before court tomorrow, however, there are people who are injured and we believe that in the interest of justice of good conscience, these people who are injured should either be released on bail or at least sent to the hospital accompanied by the police,” Francis Sosu told GhanaWeb.He added that “but as we speak now all these injured people are still in the cell locked up and not granted bail and they are not feeling too well not only as of the NDC Member of Parliament but as a human right lawyer who believes these guys have the right to protest. If their process is unlawful and the police had to arrest them, fair enough but they need to do the needful even in war times people who are injured are given medical attention. So when you have arrested somebody who is injured the law requires you to take them to the hospital for medical attention if you won’t give them medical attention then you must release them on bail.”

Some protesters believed to be sympathizers of the National Democratic Congress in the early hours of Thursday morning clashed with the police over the declaration of results of the 2020 presidential and parliamentary elections.Hundreds clad in red attire and NDC party colours, amassed at the headquarters of the EC with placards to register their protest. The police then intervened in the situation and things turned rather ugly.The protestors began littering the streets, burning car tyres, a situation which led to somewhat a public distraction.

Simon opoku Afriyie is a media pratctioner, work with otec fm, Educationist and the chief Executive Officer of of this Noble website Simon opoku Afriyie hails from Manso mem in the Amansie south district of the Ashanti Region. For any information contact me on 0240458530/0201417427 Or you can visit my Gmail address [email protected]
Previous Ablekuma Central shooting: Court remands suspect
Next Court remands three persons for robbery