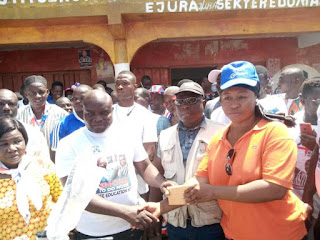 The NPP Secretary for the Ejura Sekyedumase Constituency, Madam Gifty Ndoma has donated seven brand new motorbikes worth several thousands of cedis and physical cash of GhC10,000 to the NPP Parliamentary Candidate, Hon Salisu Bamba who doubles as DCE, to support the party’s campaign towards annexing the seat of the constituency from the NDC. She made the donations on Saturday, 31st October after the party’s health walk which was intended to energise the grassroots and touch base with party supporters. The event was attended by hundreds of party supporters and sympathisers in and around the constituency who were clad in party colours.

Speaking to the media after the ceremony, Madam Gifty indicated that she had every confidence that the party will win the next elections with a landslide. “I think Ghanaians have seen the good works of the president, Nana Akufo-Addo and his abled vice, Dr Bawumia and there’s no question about the renewal of their mandate. The only question is how to widen the gap”,

she said. Touching on the chances of the PC she intimated: “Salisu Bamba has transformed the face of the municipality since becoming MCE. His achievements have been monumental. I am confident he will win the NPP the seat like he did sometime back”. 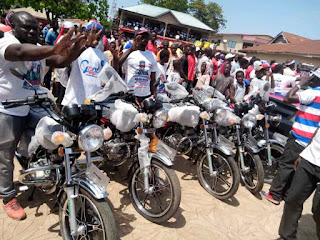 Madam Catherine Reckline, the DCE for Sekyere South district, who received the donation on behalf of the Ashanti regional minister, thanked Madam Gifty and commended her for her solidarity and commitment to the cause of the party. The items was handed over to Hon Salisu Bamba who was present at the ceremony. Party dignitaries including Kwabena Nsenkyire, Ashanti regional 1st vice chairman, Paul Kweku Duut, the constituency chairman, and other constituency executives were present at the event. 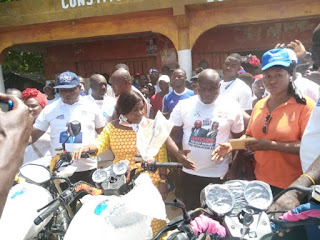 Simon opoku Afriyie is a media pratctioner, work with otec fm, Educationist and the chief Executive Officer of of this Noble website Simon opoku Afriyie hails from Manso mem in the Amansie south district of the Ashanti Region. For any information contact me on 0240458530/0201417427 Or you can visit my Gmail address [email protected]
Previous We Will votes beyond your imagination -NPP Parliamentary Candidate assured prez Akuffo Addo…
Next CHURCH OF PENTECOST OLD TAFO DISTRICT INAUGURATES PEACE CAMPAIGN