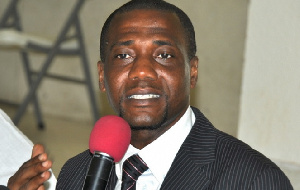 Independent Presidential Candidate in the 2012 and 2016 general elections, Jacob Osei Yeboah (JOY) has insisted that the importance of minority parties in the country would have been realised had the 2020 Presidential race seen a run-off

According to him, the minority parties would have settled the dispute amongst the NPP, NDC and the Electoral Commission with a run-off.

Speaking in an interview with Happy 98.9 FM’s Sefah-Danquah on the Epa Hoa Daben political talk show, JOY said:“If the elections had gone for a second round, it would’ve helped us and our importance as minority parties would have been realised

It was in our interest for a second round because with that, we could’ve determined the winner of the Presidential race without any of these problems arising”.

The opposition National Democratic Congress (NDC) says the results of the 2020 December 7 elections recorded some irregularities, invalidating the results declared by the Electoral Commission.The flagbearer of the party, John Dramani Mahama rejected the results saying he will only concede defeat if he is allowed an independent audit of the Commission’s result.

Simon opoku Afriyie is a media pratctioner, work with otec fm, Educationist and the chief Executive Officer of of this Noble website Simon opoku Afriyie hails from Manso mem in the Amansie south district of the Ashanti Region. For any information contact me on 0240458530/0201417427 Or you can visit my Gmail address [email protected]
Previous Our demonstration was peaceful until the police used maximum force – NDC
Next NDC’s demonstration is unlawful – ACP Kwasi Ofori