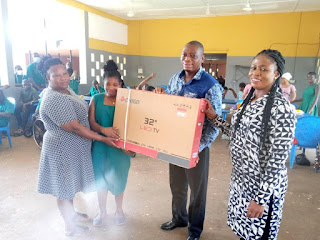 Dr. Kingsley Nyarko, Parliamentary Candidate for Kwadaso Constituency, on Wednesday 25th November, 2020, honored his promise to the Edwenease Rehabilitation Centre after delivering a television to the Institution.

The Edwenease Rehabilitation Center, earlier in the Month, informed the Parliamentary Candidate for Kwadaso Constituency of their need of a television after the one previously used by the institution got rendered inappropriate for use.

Dr. Kingsley Nyarko after the donation postulated that the inmates, activities and existence of the centre are of tremendous importance to him, so, the institution should do well to fall on him anytime it requires any other form of assistance.

The Edwenease Rehabilitation Centre is a government institution under the Department of Social Welfare. The Centre was purposely established to provide vocational training for the visually and hearing impaired, as well as those who suffer from mobility or learning difficulties in the city of Kumasi and other communities in the Ashanti Region. Some of these skills include beading, leather works, sewing, needlework, shoemaking, hairdressing, beautification, rural craft courses and others.

It was first established in Kwadaso in 1958, and in 1974, the city council relocated it to its present site at Edwenase, with the initial aim of taking people with disabilities off the streets and providing care for them at the centre. However, after consultations with the Department of Social Welfare, it was agreed to include families of inmates in the process by sensitising and working with them to deal with their children’s needs.

Simon opoku Afriyie is a media pratctioner, work with otec fm, Educationist and the chief Executive Officer of of this Noble website Simon opoku Afriyie hails from Manso mem in the Amansie south district of the Ashanti Region. For any information contact me on 0240458530/0201417427 Or you can visit my Gmail address [email protected]
Previous NMC visits OTEC FM,lauds the radio station for pioneering role in Broadcast journalism
Next Don’t be used as puppets to foment trouble-police charges youth..