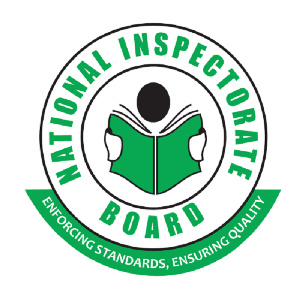 The National Inspectorate Board (NIB)

The National Inspectorate Board (NIB), now National Schools Inspectorate Authority (NaSIA), has asked the public to disregard reports on the inauguration of a private education coalition committee.This comes after an artwork suggesting same went viral on social media.

In a statement issued and signed by Rita Eva Arthur, Acting Director, General Administration, she explained the aforementioned committee is not recongised by the Ministry of Education nor the NaSIA.“The Minister of Education, Mathew Opoku Prempeh and National Schools Inspectorate Authority (NaSIA), therefore dissociate themselves from this as it is fake and has no association with the Ministry of Education and its agencies”

Simon opoku Afriyie is a media pratctioner, work with otec fm, Educationist and the chief Executive Officer of of this Noble website Simon opoku Afriyie hails from Manso mem in the Amansie south district of the Ashanti Region. For any information contact me on 0240458530/0201417427 Or you can visit my Gmail address [email protected]
Previous ‘Don’t deviate from your mandate’ – VC urges technical universities
Next Election 2020: We’re working to finalise Sene-West constituency parliamentary results – EC