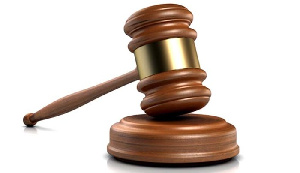 Two persons who broke into the room of a farmer and stole his properties have been sentenced to 18 months imprisonment each with hard labour by the Enchi District Magistrate court.

The three pleaded guilty to conspiracy to commit crime, stealing and dishonest receiving and were sentenced accordingly.Prosecuting, Police Detective Inspector Joseph Kwadwo Agyare, told the court presided over by Eric Baah Boateng that the complainant, Isaac Kwaw and the convicts resided at Old Yakasi in the Aowin Municipality.

On October 23, this year, at about 0600 hours, the complainant woke up and noticed someone had broken into his room through his back window and the aforementioned items purloined.

He said the complainant made announcement at the local information center at Old Yakasi about the theft, and there after proceeded to the Old Yakasi police station to lodge a formal complaint.

Detective Inspector Agyare narrated that on October 28, this year police intelligence led to the arrest of Musawudu and during interrogation he mentioned Kwaw as his accomplice and the one who masterminded the operation.

He was subsequently arrested from his hide out and the stolen items were retrieved in his room, the prosecutor said.

Detective Inspector Agyare said he made part payment of ¢200 and asked them to bring the receipt covering the items so he would pay the rest of the money.

Simon opoku Afriyie is a media pratctioner, work with otec fm, Educationist and the chief Executive Officer of of this Noble website Simon opoku Afriyie hails from Manso mem in the Amansie south district of the Ashanti Region. For any information contact me on 0240458530/0201417427 Or you can visit my Gmail address [email protected]
Previous Court remands three persons for robbery
Next Rawlings’ funeral postponed indefinitely