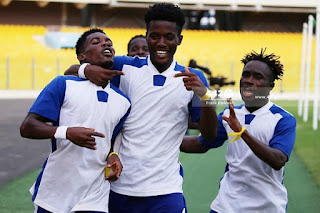 Great Olympics dominated the early minutes of the match with brilliant passes and descent crosses but their efforts couldn’t hand the opener in the first department.Veteran attacker Gladson Awako displayed a super performance in the build-up to the goal against the Porcupine Warriors.

Micheal Yeboah headed home the only goal of the game on the 53rd minutes from Awako’s cross.

However, on social media, the two times Ghana Premier League champions are over the place trolling the Porcupine Warriors following their impressive 1-0 win.

After the final whistle, Kotoko on their Twitter shared, “90+4′ FULL TIME #AKSC 0 vs 1 Olympics. The referee has blown for the end of the game. #AKSC #KOTOLY #GPL.”

Olympics responded with a video saying, “DJ, bɔ nyɛn ndwom”, which means “Plays us some music”.Dentaa Amoateng, who is the International Relations Manager of the club also tweeted, “Disappointed”.

Olympics quoted her tweet with a mind-boggling dance mocking her.

Simon opoku Afriyie is a media pratctioner, work with otec fm, Educationist and the chief Executive Officer of of this Noble website Simon opoku Afriyie hails from Manso mem in the Amansie south district of the Ashanti Region. For any information contact me on 0240458530/0201417427 Or you can visit my Gmail address [email protected]
Previous Bayern’s Robert Lewandowski scoops FIFA’s The Best award ahead of Lionel Messi and Cristiano Ronaldo
Next Asante Kotoko coach Maxwell Konadu take lessons from Great Olympics defeat