Ace broadcast journalist of Otec FM, Simon Opoku Afriyie has made a donation to his residents at Manso in the Amansie South District of the Ashanti Region on Sunday, December 27, 2020. 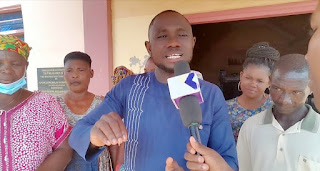 The ace reporter told media that as a native of the community, there was the need to come out with such an initiative to provide for families in need by putting smiles on their faces in such a festive season.

“I was born and bred in this town and feeding my people is such a great pleasure,” Mr Simon Opoku Afriyie said.

“It’s always depressing to see widows and orphans in such states when others come together to celebrate with families. It was, therefore, necessary to also inspire them through giving in order not to mourn over the demise of their love ones in such a time but to be encouraged,” he added.

He explained that doing such is what God expects and it’s one way to open doors in the life of anyone seeking to prosper in every area of life. He also called on rich and wealthy in the district to extend helping hand to such.

“I am also calling on the rich not to abandon the poor but to reach out to them as a beacon of hope just like I have planned with my family to put smiles on the faces of people.

“There is much blessing in giving than receiving as the scripture says and as humans, there is always the need to extend our arms to the needy. When such are happy and they pray to God for the food, that alone opens doors so this is not a nine-day wonder, but we will continue to push this agenda.

“Besides, we are also planning to visit the orphans in the new year and help to strengthen persons lacking,” he added.

Beneficiaries also expressed their appreciation to the Journalist and called for God’s blessing for him to keep providing for the needy.

Simon opoku Afriyie is a media pratctioner, work with otec fm, Educationist and the chief Executive Officer of of this Noble website Simon opoku Afriyie hails from Manso mem in the Amansie south district of the Ashanti Region. For any information contact me on 0240458530/0201417427 Or you can visit my Gmail address [email protected]
Previous Prof Opoku-Amankwa opens a 5-Day Trainer of Trainers CCP Workshop for 6240 Participants
Next Otec FM journalist donates to residents in the Amansie South District Why do women vomit during pregnancy?