Breaking News
Home / RELIGION / Nana Akuffo Addo will Be Re-elected as the president of this country, Mahama Should stop campaigning…St. Sark.

Nana Akuffo Addo will Be Re-elected as the president of this country, Mahama Should stop campaigning…St. Sark. 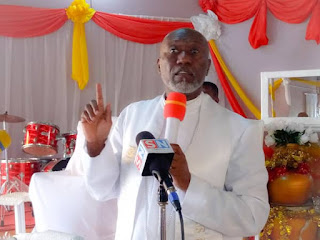 The founder and leader of Open Arms Ministries Apostle Kofi Nkansa Sarkodie popularly known as Saint Sark has today revealed that 2020 election is a win for the ruling New Patriotic Party and for that matter former president Mahama should stop wasting his time campaigning.

According to him heaven has chosen the flag bearer of the ruling new patriotic party and there is no way human being can change the will of God since what is written ins written.

Speaking to the media in a press conference ahead of December 7th general election today at Suntreso church premise Apostle King Sark sark stated that here in this country there is only three political parties that has been chosen by God which is NDC, NPP and CPP which according to him the rest are all fake and there is no way the can win any election in this country.

It is so pathetic for the people in this country to tag you as NDC or NPP when you speak your mind and it goes contrary to any of these political parties favourite which according to him this is absolutely nonsense and it should be condemn we are also in this country we feel whatever going on here. Addressing the media today, this is what Apostle Kofi Nkansah Sarkodie also known as St.Sark, the founder and leader of Open Arms Ministries stated.

Simon opoku Afriyie is a media pratctioner, work with otec fm, Educationist and the chief Executive Officer of of this Noble website Simon opoku Afriyie hails from Manso mem in the Amansie south district of the Ashanti Region. For any information contact me on 0240458530/0201417427 Or you can visit my Gmail address [email protected]
Previous Tabita Pulakuu International Ghana Chapter threatens court action against EC officials IF
Next BABA,NETTEY,JOHN BOYE START AGAINST SUDAN.