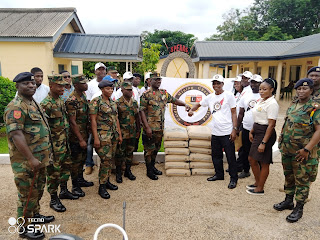 Goldline Mining Ghana Limited, a mining company cited at Manso- Wahaso-Aponapon in the Amansie South District of Ashanti has donated building materials worth GHS19000.00 to the Headquarters (HQ)Central Command (C/COMD) of the Ghana Armed Forces (GAF) to support them with a 20-bedroom self-contained accommodation they are putting up.

The Central Command serves as the Headquarters and also responsible for the command, control, and administration of all the military units in the Ashanti, Ahafo, Bono, and Bono-East Regions. 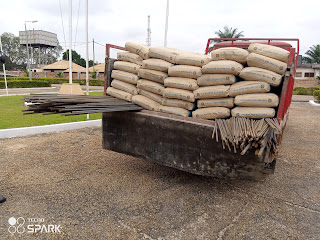 The facility which is a two storey building is designed to replace some of the wooden and dilapidating structures, which currently serve as places of abode for soldiers at the Barracks. 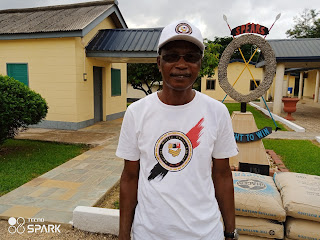 Making the presentation at the project site, Yaw Boakye Yiadom, who is the Director of Administration, said that soldiers play important role in the security of the country and therefore needed to be motivated to be able to discharge their duties well. 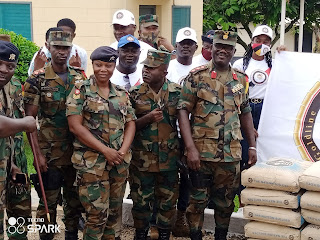 He added that gesture was part of the company’s corporate social responsibility and also fulfilment to a promise made to GAF after they (GAF) called on them for assistance.

Yaw Boakye Yiadom urged all Ghanaians to ensure that soldiers in the country live in a comfortable accommodation to be able to execute their duties wholeheartedly. 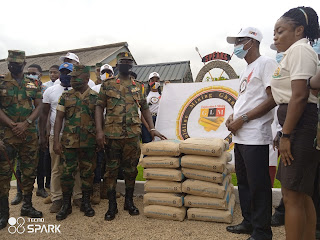 “Sometimes when you go near where these gallant soldiers live, it is not appreciable and all must come on board to support the government to give them a befitting accommodation to lay their heads,” he continued.

“Government is doing its part and as a mining institution and as part of our social responsibility and that is why we came here with 300 bags of cement and 2 tonnes of iron rods”, he said. 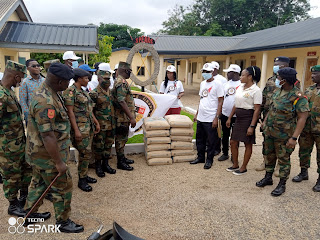 Taking the delivery on behalf of Brigadier General J. A.  Aphour, the General Officer of Commanding Central Command, Colonel Emmanuel Gyadu, who is the Command Operation Officer said the need arose for the construction of the because of the accommodation conditions at the barracks which are in bad state. 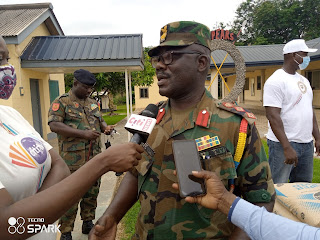 He expressed gratitude for the company’s gesture and urged philanthropic agencies and individuals to donate towards the successful and timely completion of the project.

He assured that the project will be completed within one year.

Simon opoku Afriyie is a media pratctioner, work with otec fm, Educationist and the chief Executive Officer of of this Noble website Simon opoku Afriyie hails from Manso mem in the Amansie south district of the Ashanti Region. For any information contact me on 0240458530/0201417427 Or you can visit my Gmail address [email protected]
Previous Don’t be used as puppets to foment trouble-police charges youth..
Next Farmer Urges Gov’t To Motivate Youth To Invest In Agric