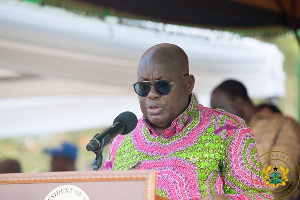 A founding member of the National Democratic Congress (NDC) in the Ashanti Region, Alhaji Saani Mohamed, has chided the New Patriotic Party’s flagship Free SHS policy, saying it is unconstitutional.

Alhaji Sani Mohammed explained that the president was supposed to have followed the progressive Free SHS as enshrined in the 1992 constitution.He is of the view that the abrupt introduction of the Free SHS was unconstitutional.Article 25 of the 1992 constitution cites that “Secondary education in its different forms including technical and vocational education, shall be made generally available and accessible to all by every appropriate means, and in particular, by the progressive introduction of free education.”

Speaking on Akoma FM‘s morning show GhanAkoma on Monday, November 30, the NDC founding member explained that “former president Mahama started the progressively free education in 2015, but the NPP should have continued the progressively free SHS which the 1992 constitution enjoins all governments to gradually ensure”.He added that “even the free SHS, which is supposed to be gradual, [was] for political expediency introduced… just to fulfil the political promise”.The ownership of Free SHS has been the subject of discussion quite recently.

Simon opoku Afriyie is a media pratctioner, work with otec fm, Educationist and the chief Executive Officer of of this Noble website Simon opoku Afriyie hails from Manso mem in the Amansie south district of the Ashanti Region. For any information contact me on 0240458530/0201417427 Or you can visit my Gmail address [email protected]
Previous NPP’s Abronye involved in an accident
Next Reward Prez Nana Addo with education legacy made to save vulnerable by voting : Hon Asiamah