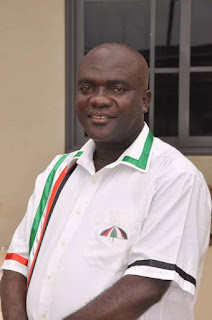 The Parliamentary Candidate for Adansi Asokwa, Nana Boakye Achampong A.K.A Achiken has stated that his stewardship as a MP for the constituency he is going to establish office that will conducting and collecting data from each electoral area for which he is going to support each and everyone through skill training and entrepreneurship.

He said by so doing it will go a long way for him to identify those who in need of help.

According to him, seems elections are won by polling stations need to be vigilant and senseless to absorb and art galleries such electoral fraud and rigging by opponent.

So as a parliamentary candidate he have put it upon himself to educating his agent’s to also be aware that if even he or she disagreed that is not enough excuse but to give reasons that will detailed description of why.

He urge the youth to desist from politics of insult and electoral violence during and after the general elections.

Nana Boakye Achampong poised to win upcoming general elections not less than 53% votes base on his track record.

Simon opoku Afriyie is a media pratctioner, work with otec fm, Educationist and the chief Executive Officer of of this Noble website Simon opoku Afriyie hails from Manso mem in the Amansie south district of the Ashanti Region. For any information contact me on 0240458530/0201417427 Or you can visit my Gmail address [email protected]
Previous Hon Isaac kwame Asiamah tour 537 communities in the Atwima Mponua district
Next NPP MEDICAL TEAM CONDUCTS FREE HEALTH SCREENING FOR ASAWASE RESIDENTS.