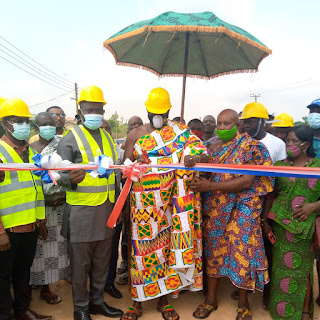 A 52-year old collapsed bridge linking Adako Jachie and Kokobra in the Ejisu- Juaben Municipality, which broke down in 1968 is getting a facelift after  Lawyer John Ampontuah Kumah, the Member of Parliament- elect for Ejisu Constituency, rallied support from his colleague contractors.

The Samam River Bridge was destroyed after a heavy downpour in 1968 and cut off communities which were dependent on each other.

The destruction of the bridge became a source of worry to the people, especially school children that used the route to schools in other communities, compelling them to go through the Kumasi-Accra road to have access to the other school in the other communities.

However, commencement of work on the bridge by contractors has sparked excitement among the constituents and the traditional leaders.

Chief of Adako Jachie, Nana Osei Bosompem III, during inspection by the MP- elect disclosed, efforts to fix the bridge yielded no results from previous governments and officials over the years.

Chief and community leaders over the years tried to get this fixed, but countless appeals to authorities yielded little results, he added

He commended John Kumah for his swift response in ensuring that works on the collapsed bridge began. 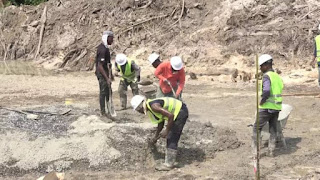 With the intervention arranged by the MP-elect, over 200 thousand cedis will be spent on fixing this portion of the bridge.

John Kumah when speaking to  Choicenewsonline said, works on the bridge were being done through high colleague road and building contractors and was not relying on government on funding the project.

The Ejisu Constituency MP- elect who is also a contractor disclosed that he managed to convince other three road contractors aside the main contractor, So Good Construction Limited to work on this bridge and others as corporate responsibilities to help improve the conditions of people of Ejisu and its environs.

In another development, the MP elect has commissioned and handover an engineered bridge over Bediwaa Amponsah River at Asamang Akrofuoso that connect to Ejisu, Serwaa Akuraa, Tikrom and Bayero other neighbouring communities.

Nana Prempeh Buhyiaman II, the chief of Asamang Akrofuoso, said the bridge over the river had broken down over decade and efforts to also fix it became herculean task to the people of the community.

An elated looking chief thanked the MP- elect for the area for heeding to their plea to get the bridge fixed during one of his campaign tours in the area.

I am thankful to God that we now have an MP who do not only listen but also swift to act on his promises, he added.

Drivers had to use a metal slab to support the bridge which had partly caved in, according to Nana Buhyiaman.

Addressing the media, Lawyer John Kumah said the bridge needed swift attention as it posed threats to lives of the people in his jurisdiction.

This bridge needed an urgent attention during the campaign period. It was almost unusable. It has been almost ten years that the bridge collapsed and drivers had to use metal slabs to support a portion of the bridge that had partly caved in. With consultation and permission from the chief, I decided to fix the road before even government would award to a contractor, he said, adding that the essence of his action was to improve the lives and well-being of the people of Asamang and its environs from any possible accident.

John Kumah disclosed that his tenure will aim at helping improve transportation in the area. 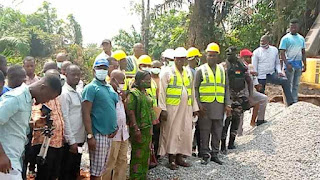 I want all the major roads within the constituency to be asphalted. We will be consulting various stakeholders and government to lobby to ensure that the various roads are put into proper shapes, he added.

An estimation of over three hundred thousand cedis have been secured for two of such projects.

Simon opoku Afriyie is a media pratctioner, work with otec fm, Educationist and the chief Executive Officer of of this Noble website Simon opoku Afriyie hails from Manso mem in the Amansie south district of the Ashanti Region. For any information contact me on 0240458530/0201417427 Or you can visit my Gmail address [email protected]
Previous Nsuta –Kwamang- Beposo NPP MP-Elect denies dual citizenship tag
Next Kwadaso Municipal Taxi Association Celebrates Dr. Kingsley Nyarko’s Victory and Achievement With a Football Gala